Would you like to learn more about the history of natural gas?

How has it developed to the present level of technology?

In order to familiarise ourselves with this energy and understand everything related to it,

we will examine its origins and history.

End consumption of natural gas grew strongly until the crisis of 2008-9. This increased gas consumption was driven by:

Between 1985 and 2000, the growing use of gas in industrial processes together with a gradual increase in home use.

Beginning in 2002, the installation of combined cycle natural gas plants that use natural gas as fuel for power generation, increasing performance, reducing costs and CO, CO2, NOx emissions, and practically eliminating the emission of particles and sulphur derivatives.

In Spain, the The Group, known at that time as Gas Natural, pioneered the introduction of combined cycle plants, starting up the San Roque plant in Cadiz in 2002.

In line with the development of the gas market during these years, Gas Natural has continued its expansion in Europe and Latin America while diversifying its activity, entering the exploitation and production of gas business as well as the wind power market. As a result, in 2005 the company became one of the main wind power operators in Spain and with the creation of the Repsol-Gas Natural LNG joint venture, Stream has driven the LNG (liquefied natural gas) business. In 2008 the acquisition of Unión Fenosa was completed and 2010 saw the launch of the Gas Natural Fenosa brand.

Out of Spain's current housing stock of 22 million dwellings, 7.2 million (33%) have a natural gas supply. Naturgy is the largest integrated natural gas and electricity company in Spain and Latin America. It has a presence in 30 countries and has nearly 18 million customers worldwide.

In 1998 the process of deregulating the gas sector in Spain began with the publication of the Hydrocarbons Act. This Act forced the separation of transport networks and the role of System Technical Manager from distribution networks and commercialisation.

1991: Integration of the gas sector in Spain

1991: Integration of the gas sector in Spain

Thanks to the new situation in the Spanish gas sector, with excellent possibilities for growth and development, two major shareholders joined the other shareholders of Catalana de Gas: La Caixa and Repsol.

With the support of these two shareholders a new business project was rolled out involving the integration of the gas distribution sector in Spain (with the merger of Catalana de Gas, Gas Madrid and Repsol Butano's piped gas shares).

As a result a new company was set up in 1992: Gas Natural SDG, S.A., which, in the same year, began a process of international expansion in Latin America, beginning with Argentina and continuing in Brazil, Colombia and Mexico in subsequent years.

Between 1985 and 1993 the gas supply came mainly from LNG (liquefied natural gas). In 1993 the first international connection of the Spanish gas system, in Larrau, France, started up and in 1996 the Maghreb-Europe pipeline was inaugurated. It runs from the gas site in Algeria, passing through Morocco (transit country) and connects with mainland Spain in Tarifa.

In 1998 the process of liberalising the gas sector in Spain began, with the publication of the Hydrocarbons Act. This Act forced the separation of transport networks and the role of System Technical Manager from distribution networks and commercialisation.

The history of gas use in Spain began in 1841 when Charles Lebon won the first contract for public lighting using gas, with Barcelona City Council. Thanks to this concession, the first gasworks in Spain was built in the Barceloneta district, and in 1843, Lebon, the Gil y Serra brothers and other shareholders founded the Sociedad Catalana para el Alumbrado por Gas (the Catalan Gas Lighting Company, SCAG). 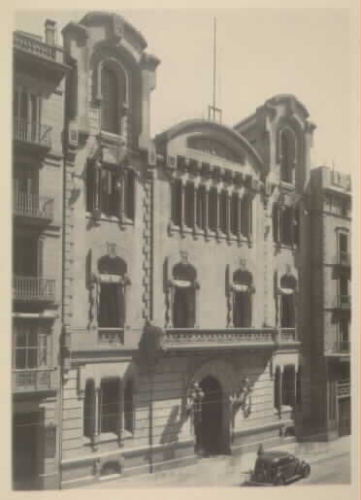 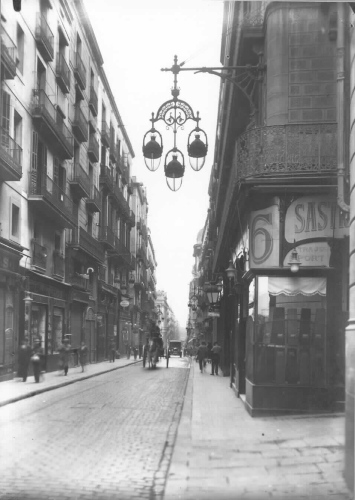 Paradoxically, natural gas, now considered a "modern" energy source, has been known to humanity for thousands of years. Primitive peoples saw the flames which shot up in swamps after a lightning strike. Since then, the third state of material, gaseous, has been a constant source of fear and concern, due to its mysteriousness and intangibility.

It is known that in China, natural gas was already being put to practical use in the 10th century. While mining for salt, the Chinese found pockets of gas which they channelled in a rudimentary manner with bamboo. In the West, too, the Greek and Roman civilisations knew its flame.

The Greeks were aware of the existence of oil in the Caspian Sea and their writings describe the huge flames caused by the gas associated with it. Also, Plutarch, while narrating the conquests of Alexander the Great, tells of finding a source of fire in Ecbatana. Pliny describes the existence of natural gas, which ignited when torches were brought near. However, it does not appear that anyone tried to use this natural fuel until much later, when with the development of the manufactured gas industry, the technology became available to use natural gas.

The history of gas use in Spain began in 1841 when Charles Lebon won the first contract for public lighting using gas, with Barcelona City Council. Thanks to this concession, the first gasworks in Spain was built in the Barceloneta district, and in 1843, Lebon, the Gil y Serra brothers and other shareholders founded the Sociedad Catalana para el Alumbrado por Gas (the Catalan Gas Lighting Company, SCAG).

In the early years of gas three men and two methods of producing gas need highlighting:

The Scot, William Murdoch, who in 1792 managed to light his house with gas produced from coal.

The Frenchman, Lebon, who in 1801 was trying to use the gas obtained from distilling wood for similar purposes.

The German, Frederick Albert Winsor, who in 1804 presented his experiments with gas lighting in London.

But it was Windsor who created the first gas company in the world to provide public lighting with gas produced from coal. This was the “Gas Light and Coke Company”, founded in London in 1812.

The history of gas use in Spain began in 1841, when Charles Lebon won the first contract for gas public lighting with Barcelona City Council.

A year later, on the basis of this concession, the first gas plant in Spain was built in Barceloneta. In 1843 Lebon founded the Sociedad Catalana Para el Alumbrado por Gas (SCAG) with the Gil y Serra brothers and other shareholders.

From 1853 on other companies entered and began competing in the market.

Thus, SCAG began to extend geographically throughout Spain and, in 1884, it became the 7th European group in terms of its contributions to the Société Téchnique de l’industrie du Gaz.

As the use of gas for public lighting became more popular in the course of the 19th century, the idea arose of building a gas plant in the largest municipality and transporting it to the others in the area. That was how piped gas distribution began – to save on costs and investment.

From the late 1950s until the early 1970s, installations in the gas sector had become old and antiquated. Industrial restructuring saw the start of a modernisation process. A very important feature of this was the switch from producing gas from coal to producing it from naphtha.

1894: Electricity arrives with a bang

1894: Electricity arrives with a bang

In 1894 Allgemeine Elektrizitäts-Gesellschaft (AEG), the leading German and European company in the electricity industry, set up the Compañía Barcelonesa de Electricidad in Barcelona.

Faced with this, the Sociedad Catalana para el Alumbrado por Gas and Lebon decided to enter the market for generating and selling electricity, and together, in 1896, they founded the “Central Catalana de Electricidad”.

Later, in 1911, the Barcelona Traction, Light & Power company was set up with the help of international capital and a lot of financial backing. This company became the leading competitor in the electricity sector.

Given this situation SCAG changed its strategy and started a process of major growth and acquisitions; in 1913 it became the 7th company in Spain in terms of market capitalisation. During this period SCAG changed its name to Catalana de Gas y Electricidad (CGE).

The arrival of electricity meant gas had to compete with it in the lighting market. In the end, it lost the battle. Faced with this situation, gas had to look for new uses and focussed primarily on the kitchen. Advertising was used heavily to promote it.

Between the late 1950s and the early 1970s the Stabilisation Plan and Development Plans were implemented in Spain, and peseta was floated on world currency exchange markets.

In the gas sector the installations were old and antiquated, so a process of modernisation began, in which the switch in 1963 from manufacturing gas from coal to producing it with naphtha was of major importance.

This change was followed by the arrival of more modern chemical plants, which meant an increase in the productive capacity of the plants.

To find an outlet for this increased production it was necessary to look for new uses of gas and this led to the heavy promotion of gas heating.

Supplying natural gas direct without the need for gas plants began in Spain in 1969. With other stakeholders, Catalana de Gas y Electricidad set up Gas Natural S.A. to import natural gas from Libya and built a regasification plant in the Port of Barcelona, as well as the first Spanish LNG tanker: “El Laietà”.

1969: Start of the direct supply of natural gas

1969: Supplying natural gas direct without the need for gas plants begins in Spain.

Natural gas was first used in the US in 1821, from a shallow well dug in Fredonia, New York, by William Hart, who is regarded as the "father of natural gas".

Natural gas arrived in Europe between the late 1950s and the early 1960s as a result of three factors:

The discovery of natural gas fields in Europe and North Africa.

The development of cryogenic technology between 1960-1962.

Growing ecological awareness and the search for cleaner alternative fuels to coal and oil, such as natural gas.

Supplying natural gas direct without the need for gas plants began in Spain in 1969.

A very important role in this development was played by Catalana de Gas y Electricidad which, with other stakeholders, set up Gas Natural S.A. to import natural gas from Libya and built a regasification plant in the Port of Barcelona, as well as the first Spanish LNG tanker: “El Laietà”.

1985: Memorandum of understanding for the development of gas in Spain

This protocol, signed by the Ministry of Industry and Energy (MINER) and the main distributors and suppliers of natural gas, meant the start of a long-term expansion plan, accompanied by greater investment and an increase in both distributors and customers. Thanks to this, the sector in Spain began quickly to make up for its historical backwardness in relation to Europe.

In 1990 the process of switching from city gas to natural gas in Barcelona (begun in 1985) was completed with the closure of the last functioning gas plant in the city, in Sant Martí de Provençals.

We use cookies on our website to give you the most relevant experience by remembering your preferences and repeat visits. By clicking “Accept”, you consent to the use of ALL the cookies. However you may visit Cookie Settings to provide a controlled consent.
Cookie settingsACCEPT
Manage consent